The phrase “wine dinner” carries a certain connotation. The participants are staid and refined, speaking in hushed tones with lots of swirling and using words like chewy and flinty and musty. These dinners are enjoyable and often educational, but they’re not known for bawdiness and revelry and raucous laughter.

Unless it’s a Friend’s of Cooper’s Hawk wine dinner, that is.

These dinners are exclusively hosted for members of the restaurant and winery’s wine club. This club is over 220,000 strong, making it the largest wine club in the country. I was invited to attend one of these exclusive events with special guest Todd Anderson of Anderson’s Conn Valley Wines.

I knew of Conn Valley from my days serving in a downtown Chicago steakhouse. I remembered them as bold with lots of character, and that’s exactly how I’d describe Mr. Anderson.

The man is gregarious and passionate. He’s a geologist and a geophysicist, bourbon-drinking and boisterous. During the reception and as the guests were seated Anderson made sure he talked to everyone, he said later, to figure out whether or not he could ue the “f-” word. The crowd laughed, knowing that in the eyes of one of the best winemakers in the world, they were cool enough that he could be himself.

And he was. He talked about buying a plot of land in Napa thirty-five years ago. What now costs $300,000 an acre, he and his dad were able to get for $10,000. He talked about being from the UP, loving Chicago – his favorite city in the world – and the chokeberry wine his dad made when he was growing up. He told us his dad had passed on Halloween, and that they hated each other, but his dad was the reason we were all there. He and his dad pounded every post in their vineyard and built the house and began growing grapes. He told the old guard of Napa they were doing it wrong. “Mondavi was pi**ed,” he grinned.

Anderson could get away with it. His first year he produced the best cabernet in the world, and his winery’s been making delicious wines ever since. He’s also the owner of Ghost Horse, which produces some of the most expensive wines anywhere, with a bottle of Spectre going for $3,500.

The guests were delighted by Anderson and his insistence that the only wine expert is you – you know what you like, and it doesn’t matter how many points a bottle receives if it doesn’t suit your palate. They were also thrilled to find out that the founder and CEO of Cooper’s Hawk himself was there. When Tim McEnery took the mic our neighbors exclaimed in surprise.

It was easy to see why. McEnery has created a culture that makes the wine experience both fun and affordable. Their wine club business model is brilliant. Members can elect to pick up their wine at the restaurant, which means they often stay for a bite to eat. Those frequent visits plus the exclusive wine dinners, like the one with Anderson, give them a sense of ownership and camaraderie.

That companionship was palpable. There was a general air of conviviality, encouraged by the gregarious Anderson, of course, but also fostered by the tasty wine and the delicious cuisine. McEnery joked with me before the dinner, and repeated when he introduced Chef Matt McMillin, that he thinks Chef bought the most expensive steaks in the country.

McMillin is Cooper’s Hawk Director of Culinary Innovation. For the dinner he created a hearty three-course meal of rich flavors and impeccable presentation. The wine pairings were, of course, delightful. The brown butter roasted arctic char (pictured above) was paired with the 2014 Conn Valley Chardonnay, a buttery white that surprisingly used no malolactic fermentation. The arctic char, a “confused trout,” as McMillin said, was reminiscent of salmon and was served with tri-color carrots, hazelnuts, and a sunchocke cream.

The second course was a duo of Braised Short Rib and that “most expensive steak in the country” Prime Dry-Aged Strip. McMillin described the process of making the beef stock from neck bones, reducing it for several hours. It was served with a winter root vegetable puree and heirloom potatoes, purchased from Nichols Farm in Huntley. This rich duo was paired with the 2013 Conn Valley Estate Reserve Cabernet Sauvignon. It’s been a decade since I used to serve wine for a living and I’ve forgotten most of the words I would have used to describe this rich, lush cab. But you know what? It doesn’t matter – what matters is that it was delicious and complemented the entree. 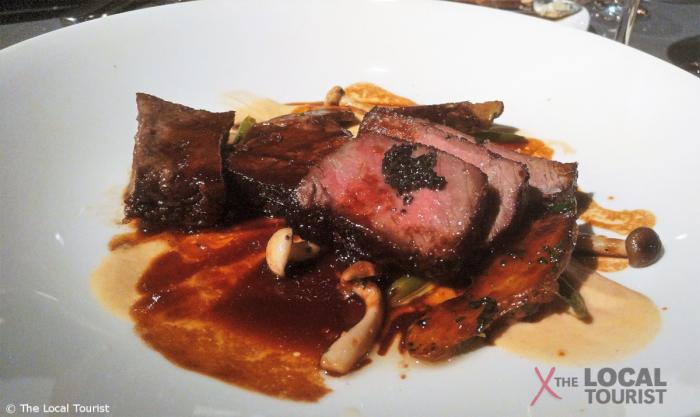 Our final course was a Tapioca Pearl Pudding topped with a mango and pineapple compote and a spiced ginger cookie. As we dove into dessert, Chef McMillin performed a cooking demonstration. We were also given recipes for the dessert so we could try it at home. There was a collective “mmmmmm” as guests finished the creamy pudding, bright tropical fruit, and the spicy gingersnap. Dessert was paired with Cooper’s Hawk Ice Wine, a sweet accompaniment to complete the experience. 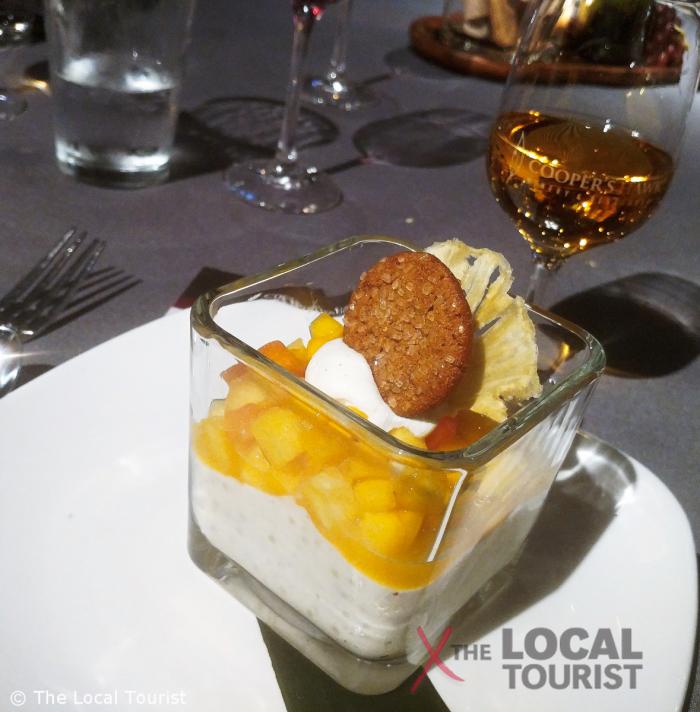 While this dinner highlighted Anderson’s Conn Valley, Cooper’s Hawk has quite the reputation for producing quality wines. They’ve received over 300 wine awards and produced over 300,000 cases in 2015. Keep in mind these wines are only available through the restaurants and the wine club! Their grapes are purchased from vineyards in California, Oregon, Washington, and Michigan, and then every single bottle is produced in Countryside, Illinois.

If you’d like access to exclusive dinners like this one, as well as 10% or more discounts on their wine and discounts on carry-out and retail, sign up for their wine club. Members are also invited on Wine Club Trips. Their next adventure will be in the Temecula Valley in Southern California’s Wine Country on March 9. You can find more information on that trip on their website, as well as how to join their wine club.

If you’re interested in Conn Valley wines, you can definitely find them at Binny’s. That’s where McEnery found Anderson! (Literally – he met the winemaker when he was doing a tasting at Binny’s and said he’d like to collaborate. I and my hundred-plus new friends from the dinner are so glad he did!)