Chicago’s DCASE (Department of Cultural Affairs and Special Events) hosts a Chicago Riverwalk kick-off celebration that highlights how much fun you can expect to have this summer.

As if the lakefront wasn’t enough to make Chicago completely awesome, the Chicago Riverwalk is amping up the summer fun game. Stretching from Lake Street to Lake Michigan, this 1.25-mile public boardwalk is lined with restaurants, cruises, docks, and more.

Chicago’s Department of Cultural Affairs and Special Events is hosting a week-long kick-off celebration that will highlight how much fun you can expect to have this summer. From art installations to a submarine memorial dedication, there’s a whole week of activities planned.

“With this summer season of Riverwalk upon us, it is easy to see why the Chicago River is the city’s next recreational frontier,” said Mayor Emanuel. “From kayaking, to fishing, to live music and great food, there is an exciting activity for visitors and residents across Chicago to enjoy this summer along the Riverwalk.”

The schedule’s below, and all events are free unless otherwise noted. 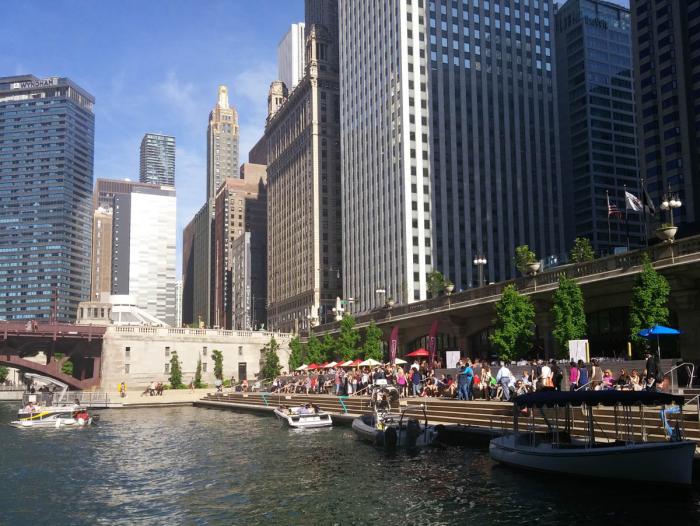 Public Art will continue to enliven the Chicago Riverwalk with a new commissioned work by Ebony G. Patterson. Known for her drawings, tapestries, videos, sculptures and installations that involve surfaces layered with flowers, glitter, lace and beads, the Kingston-born multimedia artist is creating a series of five intricate and colorful banners titled …between the below…

The banners will adorn the Chicago Riverwalk on Wacker Drive just east of the Michigan Avenue Bridge, above the Chicago First Lady dockside ticket booths.

Robert Burnier’s Black Tibernius will remain throughout the 2019 season. The large-scale work, specifically commissioned for the western Confluence section of the Chicago Riverwalk between Franklin and Lake Streets, features three geometric structures made of steel, nylon mesh and rope.

Responding to structural constraints imposed by the narrow strip of land that curves around the riverbend where Wacker Drive turns from west to south, Burnier’s suspended forms hang over the lawn and are visible from Upper Wacker as well as the river level.

The Confluence between Franklin and Lake Streets

7:45pm LUMA8’s Arts in the Dark on the Riverwalk Lantern Procession

LUMA8 presents an Arts in the Dark Lantern Procession honoring Broadway In Chicago. Spectacular lanterns created by artist Heather Killian will illuminate iconic elements of famed productions Hamilton, Kinky Boots, Mary Poppins, Aida, The Lion King, Wicked, Phantom of the Opera and Alladdin. This inaugural procession is sponsored by Millennium Park Garages and will be the first of several presented this season as part of the Second Tuesdays at the Chicago Riverwalk program.

Starting Monday, May 13 and running through September 30, 2019Art on theMART will expand to nightly showings of the largest permanent digital art projection in the world. The 2-hour projection program rotates seasonally, currently featuring a commission in alignment with the 2019 Year of Chicago Theatre by renowned media designer John Boesche. Several new “Acts” of his multi-part projection piece 7 soliloquies will debut on May 13. Boesche’s work is presented alongside a new commission by Istanbul-based video mapping group Ouchhh Studios for the spring program. Ouchhh Studios uses data gathered from musical compositions by famed Chicago-based jazz musicians to create a real-time audio and visual experience.

The projections begin approximately 15 minutes after sunset and are visible to the public from Wacker Dr. and along Chicago Riverwalk. For the special May 13 presentation, speakers will be placed in the Jetty and Confluence areas.

Second Tuesdays on the Chicago Riverwalk

Come out to the Chicago Riverwalk on the second Tuesdays (May 14, June 11, July 9 and August 13) for live entertainment, discounts and special programming from vendors including Tiny Tapp and Café, Chicago Brewhouse, City Winery, O’Brien’s Restaurant and Island Party Hut.  Upcoming second Tuesdays in June, July and August will also feature LUMA8’s Arts in the Dark Lantern Processions on the Riverwalk featuring local theatre companies in honor of the Year of Chicago Theatre. Processions start at 8:30 p.m. just east of Columbus Street and move west to the Confluence area between Franklin and Lake Streets.

Chicago Architecture Center at the Confluence

Join CAC docents to hear their favorite stories about the larger-than-life characters who made the Chicago River the nation’s crossroad of commerce then transformed it into a cultural destination and a unique urban landscape lined with architectural masterpieces. Meet at the Confluence on the Riverwalk at Lake Street and Wacker Drive.  Reservations required ($3 fee) at architecture.org/ Riverwalk 2019. 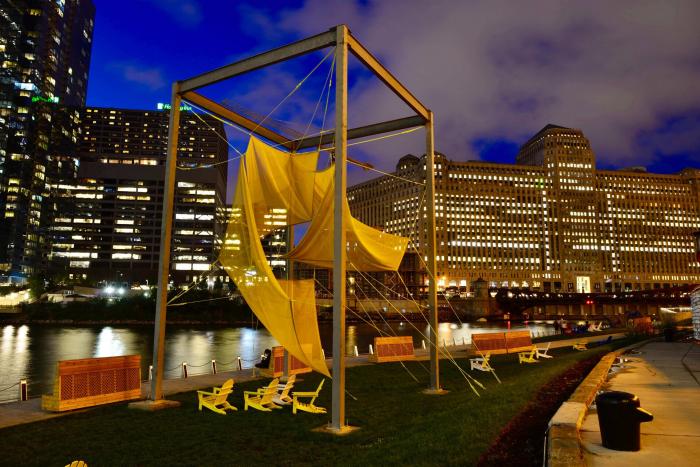 FREE one hour walks with a city wise local volunteer highlighting the history, architecture and life along the Riverwalk. Meet a Greeter at the Plaza in front of the Bridgehouse Museum, Michigan Ave and the Riverwalk. Walks are at 11:30 a.m. and 1 p.m., Thursday through Sunday. No one knows Chicago like a Greeter!

Noon–6 p.m. Fishing at the Jetty with the Chicago Park District

Returning for its third year, the Chicago Park District will share a preview of their popular Fishing at the Jetty. As they fish outdoors, children learn about the ecosystem and the role the river plays in Chicago’s history and future. The Chicago Park District’s free public programming will expand this season, with three days (Thursdays, Fridays and Saturdays), weekly from June 27 to August 17, of hands-on, spontaneous activities on the Chicago Riverwalk. 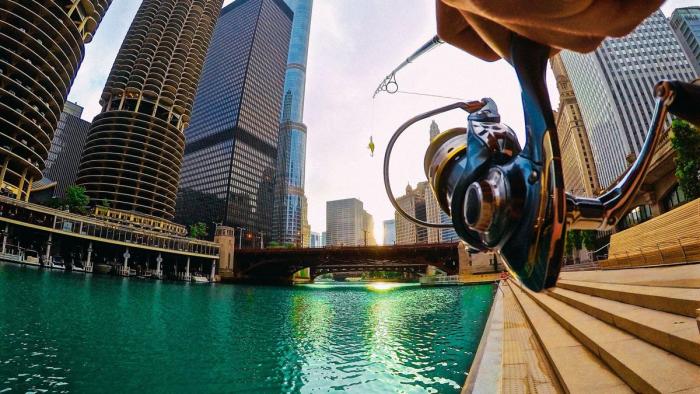 A group of Navy veterans have developed a submarine memorial for the Chicago Riverwalk to Honor, Educate and Inspire. Twenty-eight submarines were manufactured in Wisconsin after the attack on Pearl Harbor and traveled through the Chicago River to get to the Gulf of Mexico, via the Mississippi River on through the Panama Canal and ultimately to the war effort in the Pacific. The new memorial includes a submarine door and seating and will be located near the updated Field Drive Plaza on the east end of the Riverwalk. The time for the ceremony will be announced at a later date.

Chicago Riverwalk Season Celebration activities are free unless otherwise noted. The Riverwalk is open to the public from 6 a.m.–11 p.m. throughout the year. For more information about the Chicago Riverwalk and a complete schedule of events, visit chicagoriverwalk.us andjoin the conversation on social media using #ChiRiverwalk.

Make a staycation out of it! Find downtown Chicago hotels near the Chicago Riverwalk

Spa-cation at Eaglewood Resort and Spa
Next Post: A Chorus Line: Chicago Style »