Opera… What can be more romantic? Romance is the heart and soul of opera, the part we love best. As the audience, we connect with the story, suffer alongside the central characters, rejoice when things work out, and cry when they do not. And in no opera is romance more alive than in Giuseppe Verdi’s La traviata.

The sensual courtesan Violetta Valery finds true love with young Alfredo Germont in Verdi’s masterful work based on Dumas’s La Dame aux Camélias. Elegant Violetta’s life in Paris is full of fleeting pleasures. The love affair is unexpected. Their happiness is imperiled by the meddling of Alfredo’s, jealousy, and ultimately Violetta’s fragile health. This is the opera that inspired Moulin Rouge. 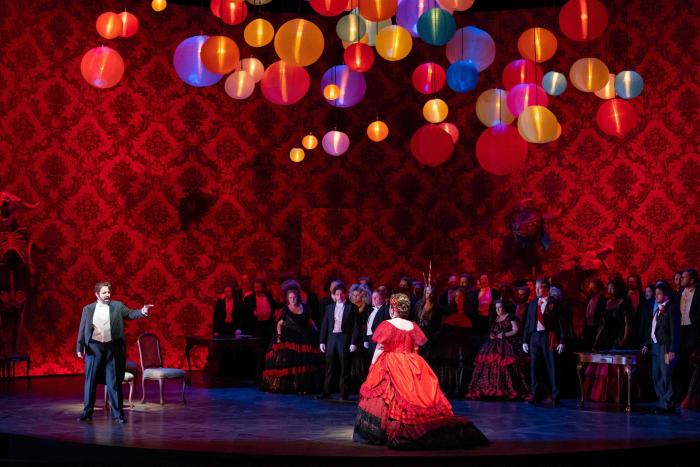 In La traviata we can see ourselves. We all have something to strive for as we negotiate the social codes we were born into. Some of us are born with fewer opportunities and work hard within the limited resources we have. We try to make the best choices, even if they are not ideal. And when we have a chance at happiness, we believe that we have found success.

A feast for all senses, La traviata combines striking sets and costumes with some of Verdi’s best arias. It is executed flawlessly by the international cast of operatic stars. Almost three hours in length, the opera flies by in a blink of an eye. Truly a treat for new and seasoned opera goers alike. La traviata will run for 10 performances through March 22nd. Don’t miss your chance to see Verdi’s masterpiece.

La traviata is now on stage at Lyric Opera of Chicago, located in historic Civic Opera House at 20 N Upper Wacker Dr, in the heart of downtown Chicago.

The Local Tourist tickets for two courtesy of The Silverman Group, Inc.