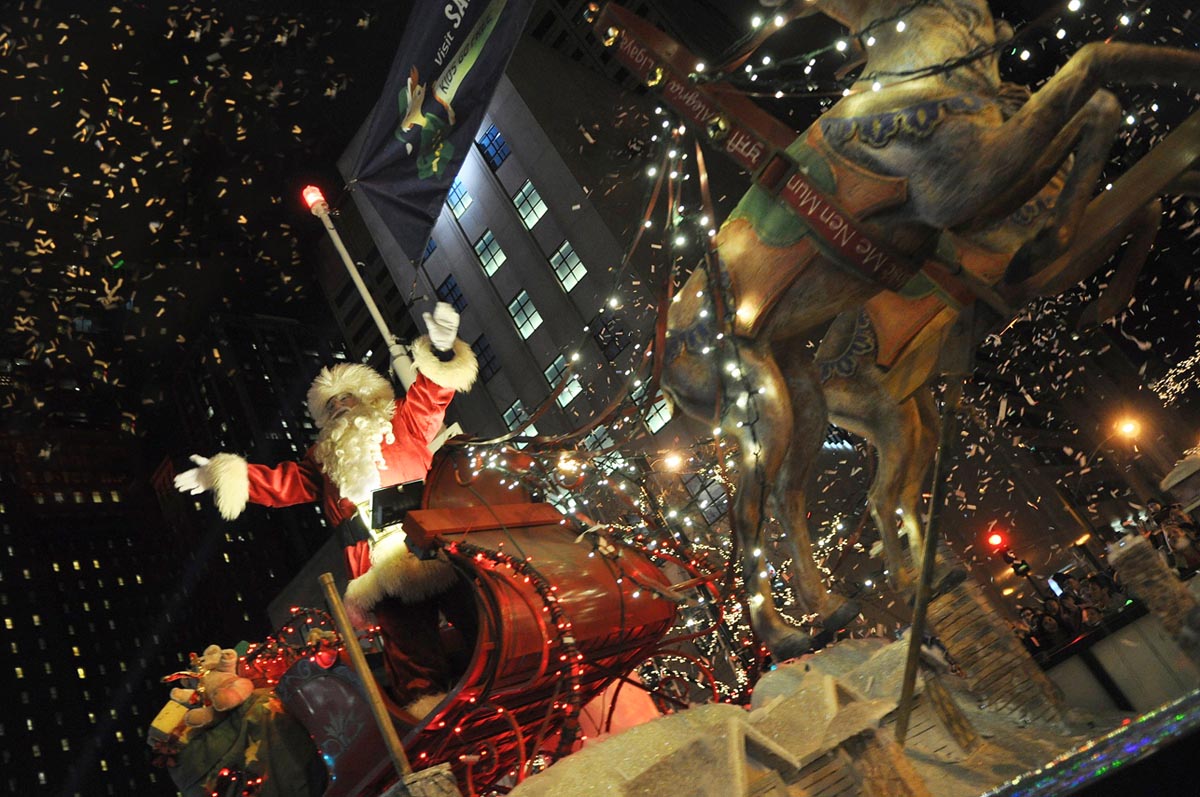 Everything you need to know about the unofficial kickoff to the holidays in Chicago.

The Magnificent Mile in Chicago is beautiful year-round, but it is particularly magnificent during the winter and the holiday season. Each November, two hundred trees are festooned with one million lights, creating a winter wonderland in the city’s most famous shopping district.

The season kicks off the Friday and Saturday before Thanksgiving, attracting millions of visitors and culminating in a parade that’s broadcast worldwide.

Here’s everything you need to know about the Magnificent Mile Lights Festival, one of Chicago’s most cherished Christmas traditions.

This Chicago festival of lights began simply, with a single tree erected in Water Tower Park in 1949 by the Greater North Michigan Avenue Association (GNMAA). It was a 50-foot tree and the association decorated it with 1,500 lights.

One of the anchor stores of The Magnificent Mile was Saks Fifth Avenue. Opened in 1929, it was the first branch of the New York department store to operate year-round. In 1959 the store made an indelible mark on Chicago by decorating the trees in front of the store with tiny white lights.

Over the years, more and more stores followed suit until it became an official event in 1992, when Walt Disney and joined in the festivities.

The company became an official sponsor, and the Magnificent Mile Lights Festival parade was born.

More sponsors participated over the years, and while it is now known as the BMO Harris Bank Lights Festival, Mickey and Minnie Mouse lead the parade each year.

Related: Find more free things to do in Chicago

Things to do at the Magnificent Mile Lights Festival

The Magnificent Mile Lights Festival is more than just a parade. It’s two days of fun!

Events begin on Friday evening and culminate with the parade and fireworks on Saturday night.

Pioneer Court, located at the base of the Chicago Tribune Tower, becomes Lights Festival Lane, a magical place where children can get their photos taken with Santa and of all ages can indulge in Chicago favorites, including Eli’s Cheesecake and Garrett’s Popcorn.

There’s also a stage with live performances. You’ll see Disney artists as well as an appearance by The Caroling Connection. These Dickensian-garbed a capella performers truly bring the spirit of the season.

The Magnificent Mile Parade begins at 5:30 p.m. on Oak Street, and for an hour and a half spectators are delighted by forty different participants, including local sports teams, giant helium-filled balloons, marching bands, and Walt Disney World characters.

The parade ends at Michigan Avenue and Wacker Drive, just south of the river.

The Grand Finale of the Magnificent Mile Lights Festival is the Fireworks Spectacular. The show begins at 6:55 p.m. and the fireworks are launched over the Chicago River. It’s truly a sight to see.

4:00 – 8:00PM:  Lights Festival Lane in Pioneer Court (401 N. Michigan Avenue) opens the evening before the parade with more than a dozen family-friendly activities from Chicago favorites and popular brands—plus live music and a visit with Santa Claus!

11:00AM – 4:00PM:  Explore an interactive wonderland of holiday-themed activities at Lights Festival Lane in Pioneer Court (401 N. Michigan Avenue), including the BMO Harris Kid’s Zone and live performances by Disney artists and The Caroling Connection.

Santa Claus is always ready to greet guests, alongside more than a dozen holiday-themed activities.

ALL DAY: Enjoy holiday experiences and special offers at participating retailers, restaurants, and attractions around The Magnificent Mile District! If you’re a BMO Harris customer, you’ll get extra perks.

Mickey Mouse and Minnie Mouse are the Grand Marshals, and they’re joined by friends from the Walt Disney World® Resort in Florida.

The parade route travels down North Michigan Avenue to Wacker Drive, lighting one million lights as they go.

Look out for lively appearances made by Hubert the Lion, Benny the Bull and other well-known Chicago mascots from BMO Harris Bank.

Get the most out of the festival of lights with these tips:

Getting to the Festival of Lights

Because there are so many people coming to the festival you’ll want to allow plenty of time.

If you plan on enjoying the festivities in Pioneer Plaza you can take the Red Line to the Grand Station or you can take any of the other lines into the Loop and walk across the river.

If you drive, there are several parking garages in the area. Use a service like Spothero to purchase your parking ahead of time. Not only will it be less stressful than trying to find a spot, reserving a space can also save you money.

To find discounted parking with Spothero, click on “Edit” below and enter the date(s) you’ll be attending the fest:

Hotels near the Magnificent Mile

Doubletree by Hilton Magnificent Mile – get a warm cookie at check-in! | Check rates

The Magnificent Mile Lights Festival is one of the most anticipated events of the year. It delights children of all ages and heralds the beginning of the holiday season in Chicago.