Puppies, LEGOs, and more at the 2019 Chicago Auto Show

As an avid roadtripper, the Chicago Auto Show is my happy place. I look at the shiny vehicles and don’t see pieces of machinery. I see adventure, possibilities, and the open road.

As an avid roadtripper, the Chicago Auto Show is my happy place. I look at the shiny vehicles and don’t see pieces of machinery. I see adventure, possibilities, and the open road.

The show is more than a static display of vehicles, although many of them, like the classic Cadillac featured below, need nothing but a spotlight. There are tons of interactive exhibits that make it a full, fun day for friends, family, and any driving enthusiast.

(Before you go, be sure to check out our tips on attending the show.)

Be sure to attend on Women’s Day! I’ll be speaking in the Her Way Lounge about how to choose road trip destinations. AND you could win a copy of my book, Two Lane Gems, Vol. 2: Bison are Giant and Other Observations from an American Road Trip. RSVP and get a free ticket to the auto show. (Limited number available)

Highlights of the Chicago Auto Show 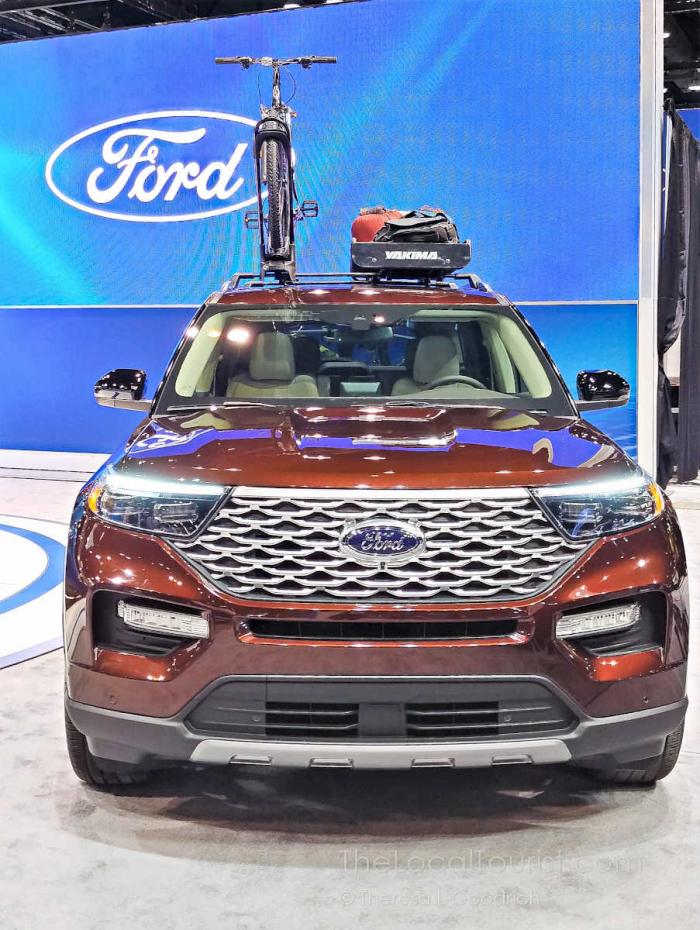 Did you know that the Ford Explorer is made in Chicago? And that the manufacturer has been building cars in the Windy City for more than a century? Now they’re investing $1 Billion to upgrade their Chicago plants and are creating 500 new jobs. $40 million will be allocated towards improving the employee work environment.

Ford builds more vehicles in U.S. than any other automaker and employs more U.S. hourly workers.

One of the biggest announcements they made at the show was the development of the new Ford Explorer hybrid. Built from the ground up as a hybrid, the SUV can go for 500 miles on one tank.

I spoke with Explorer Marketing Manager Lee Newcombe about this advancement, especially interested in its applications for road trips. One of the biggest expenses is gas, but more than that, low MPG has a huge impact on the environment.

Speaking of environment, they’ve now partnered with Yakima. You can now outfit your vehicle at the dealership with these quality racks for bikes, canoes, skis, paddleboards, and more. We love our bike rack, especially since it safely carted our bikes for more than 6,800 miles.

In addition to the Ford Explorer, the Police Interceptor Utility is also a hybrid, and its estimated annual fuel savings could be up to $5,700 – per vehicle. With their market share of more than 50% of police vehicles, this could amount to an overall savings to police departments nationwide of $118 million to $193 million per year, and more than $9 million a year in Chicago alone. 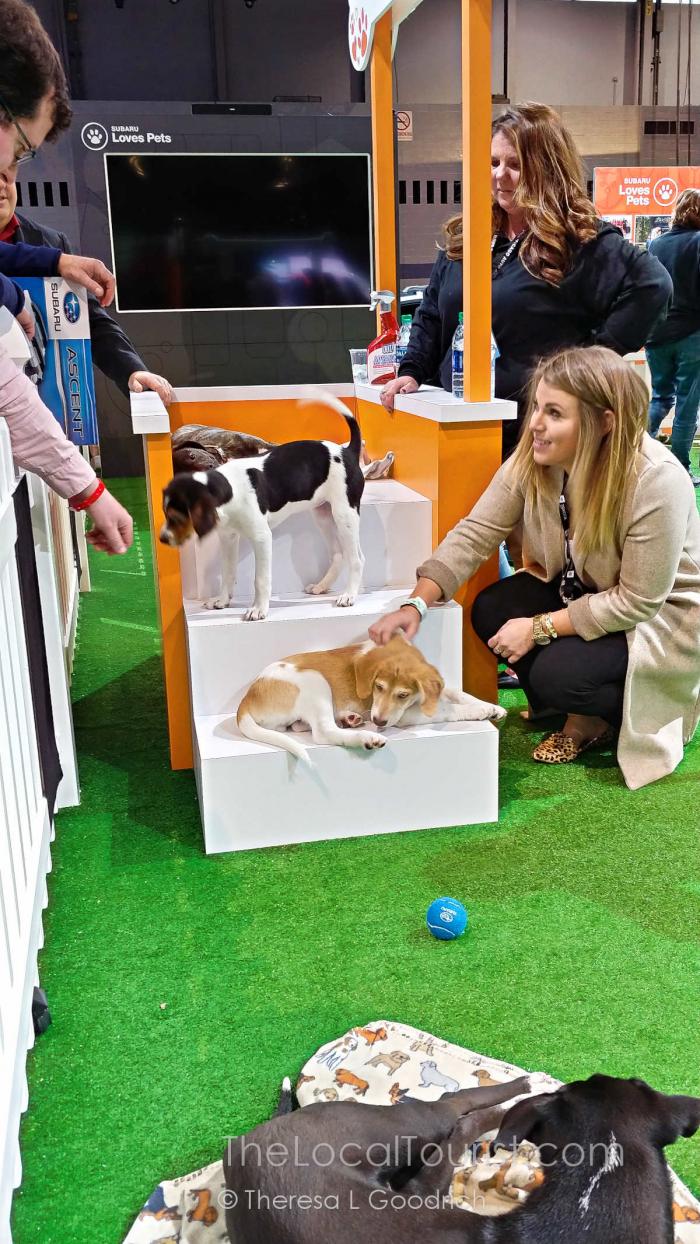 Not only can you pick out your new ride at the Chicago Auto Show, you can also bring home a new friend. Subaru of America is hosting an adoption event – at the show – with two local animal shelters. Both ALIVE Rescue and Hopeful Tails Animal Rescue will bring bundles of cuteness so you have the opportunity to adopt one of these pets in need of a good home.

Marvel at a truck made out of LEGOs

Looking for a new weekend project? Try to recreate the full size Chevrolet Silverado out of LEGOs. Or, you could just take a gander at this one. Made out of 334,544 LEGO bricks, it even has working lights.

Need a LEGO fix? Head to LEGOLAND Discovery Center to get your bricks kicks! 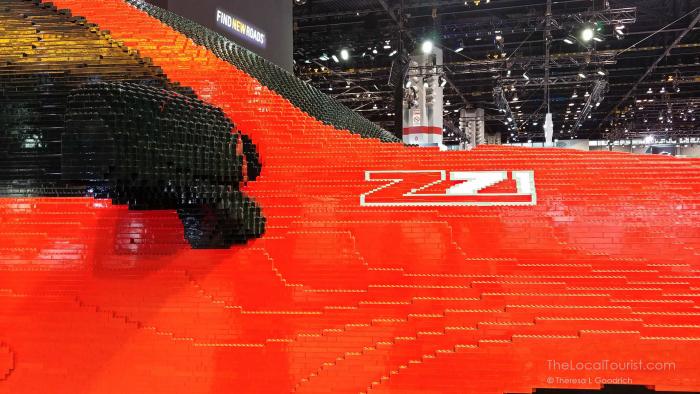 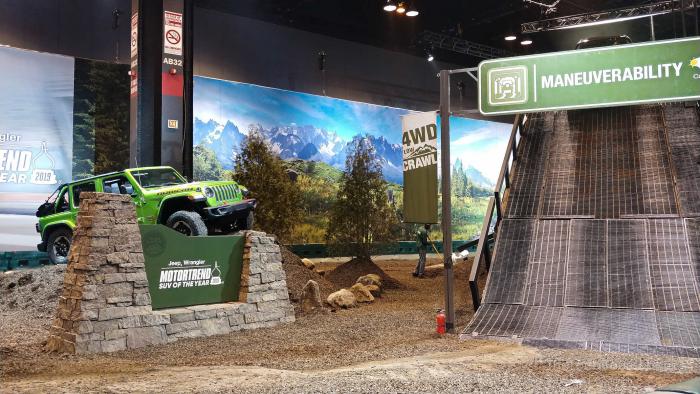 This is a highlight every year. With its sculpted, rugged track, you’ll see just what Jeeps are capable of handling. We drove a Jeep Cherokee more than 6,800 miles on our road trip through the Pacific Northwest, and I can verify that these vehicles will go just about anywhere you want to take them, and in comfort. (And we still miss Jeannie the Jeep!) 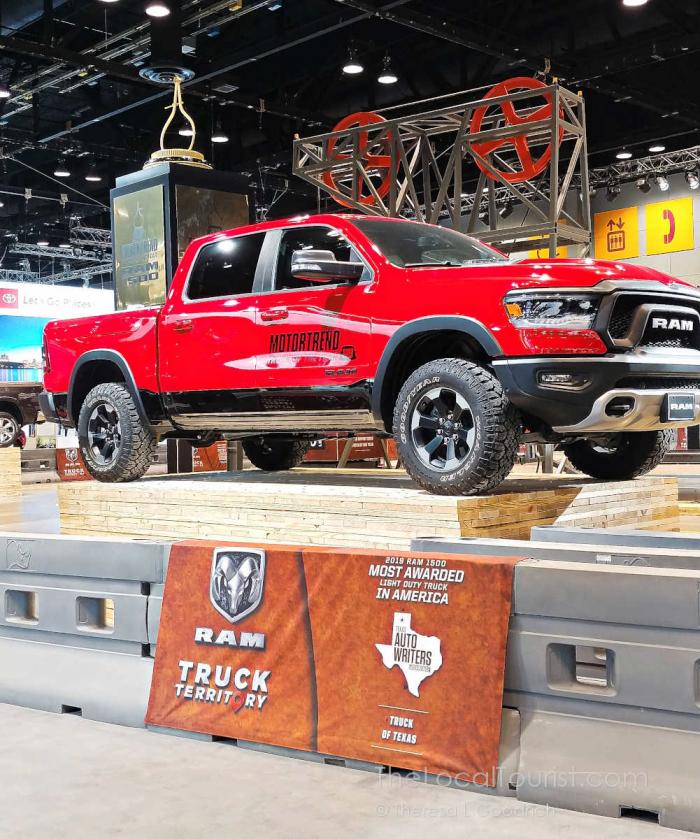 Ride this track and be amazed at the bells and whistles inside the most awarded light duty truck in America. 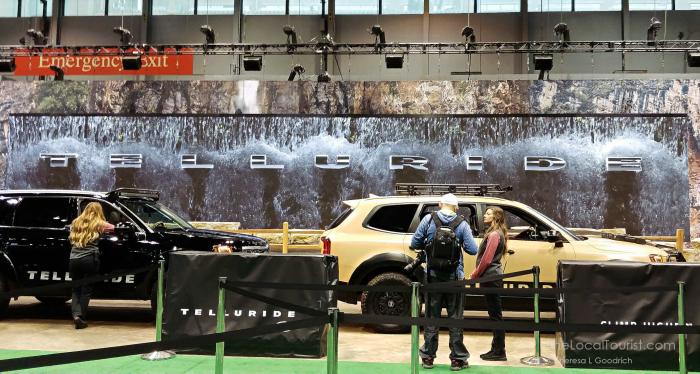 Short and fast, this was our least favorite of the three, but it’s still worth a spin in the new Kia Telluride. 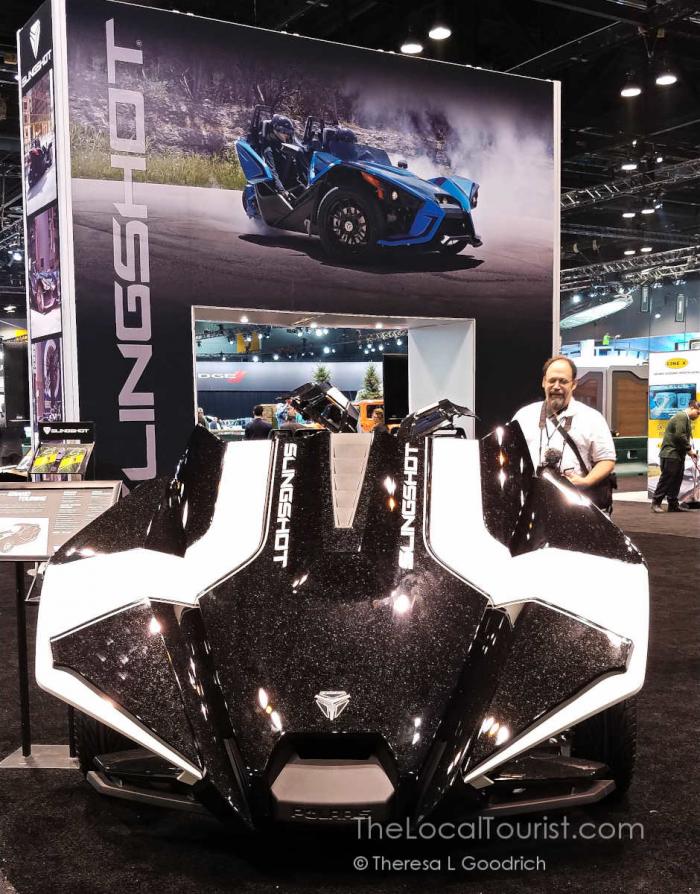 Part car, part motorcycle, this recreational vehicle looks like it’s all fun. You don’t need a motorcycle license to get behind the wheel of this bad boy, but you’ll still feel the wind in your face and the maneuverability of three wheels instead of four.

Be wow-ed by the 1959 Eldorado Biarritz 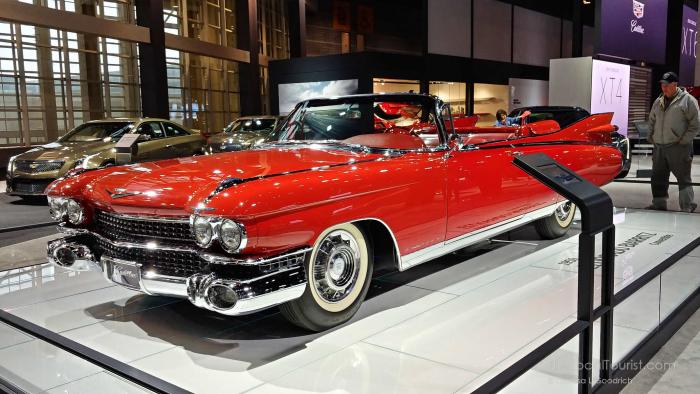 Wow. This car took my breath away. As I approached it, all I could say was “Wow.” A couple of other photographers and I stared in awe, and tried to capture its beauty.

Dream of camping in comfort 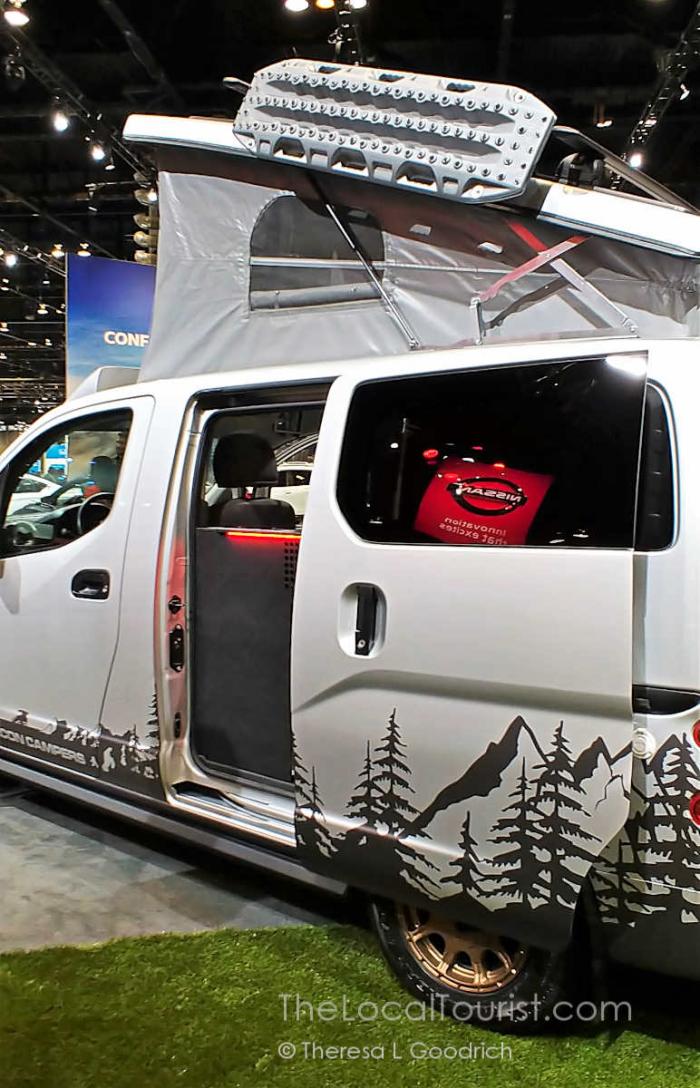 I’m obsessed with camping, and I spent so much time checking out Recon Campers they probably thought I was planning a heist of this impressive vehicle.

It’s a well-thought out piece of engineering, with comfort and usability at its core. The seat turns into a bed turns into a chaise lounge. In its chaise setting, you can face towards the front, or out the back, which is particularly useful if you’re parked in a great place with an epic view. Open those doors and take it all in from the comfort of your recliner.

The top pops up so you can stand up. There’s a sink. It comes wired for solar. The pantry shelves can be accessed both inside and outside, making putting those groceries away a breeze. 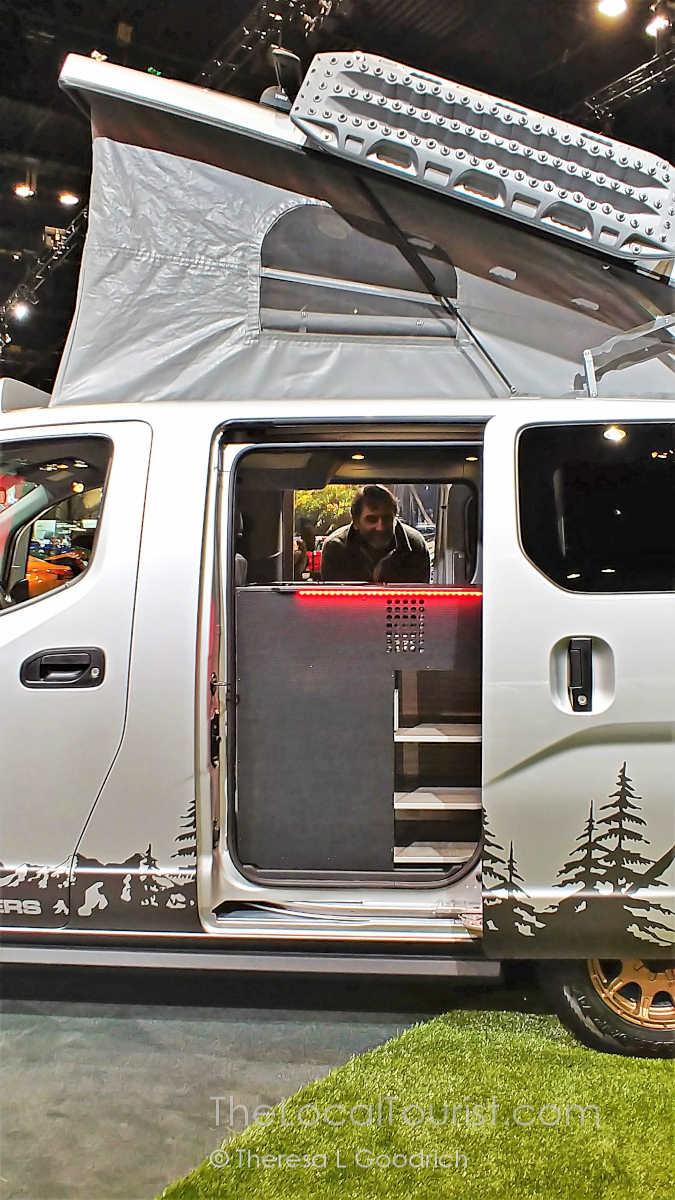 How durable is it? The model that’s on the floor of the Chicago Auto Show has been in multiple shows, and it’s used for real life camping by Alissa Kloner. Despite the use and abuse it’s received, she said she has yet to find a scratch on it.

Now this is a fun photo op! Toyota has an arc of cameras set up around a display of balls. You jump in and do…something. It doesn’t matter what, as long as you’ve got some motion. The cameras will fire simultaneously and you’ll get a fun video of your shenanigans.

Make your mark in Chicago 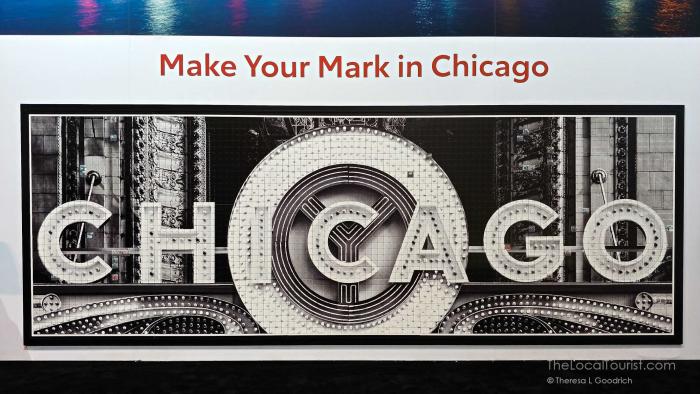 Also hosted by Toyota, they’ll take your picture and then add it to a giant image of The Chicago Theatre marquee. By the end of the show (or probably before it’s over), thousands of images of show-goers will combine to bring the black and white background to colorful life.

Stay where you play! Find a hotel near McCormick Place 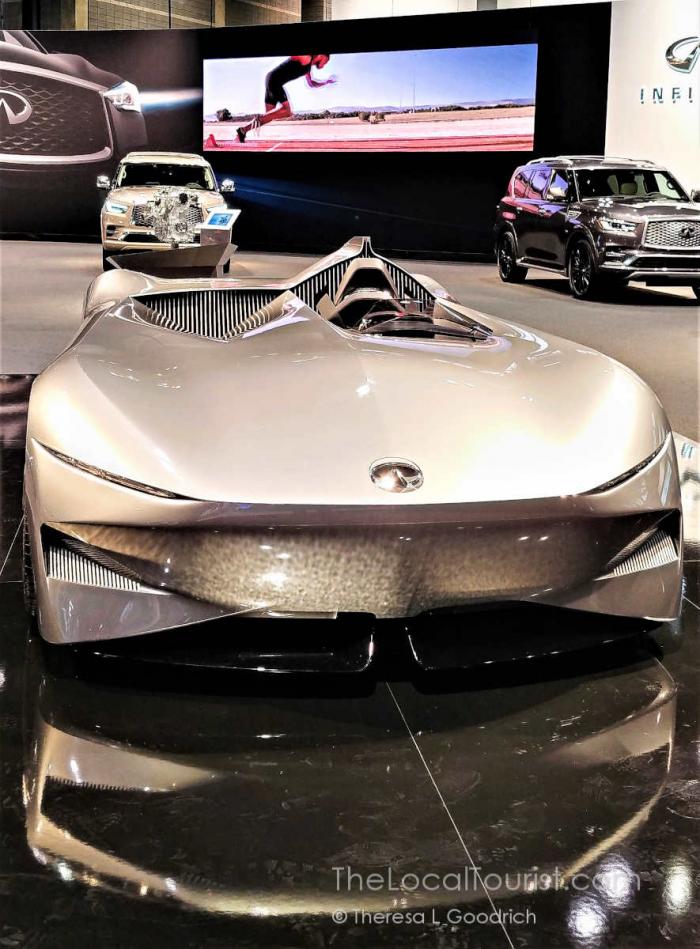 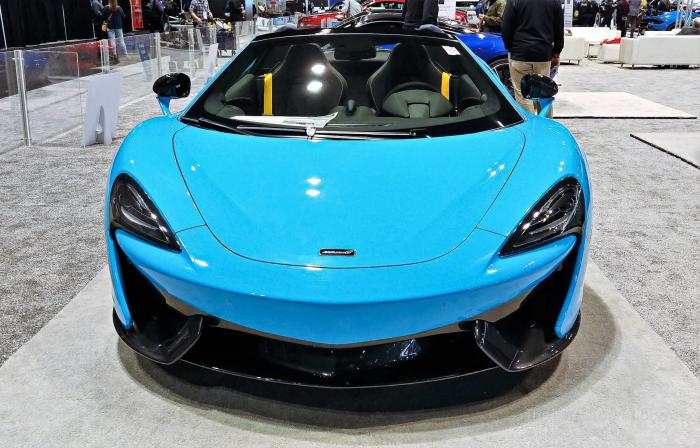 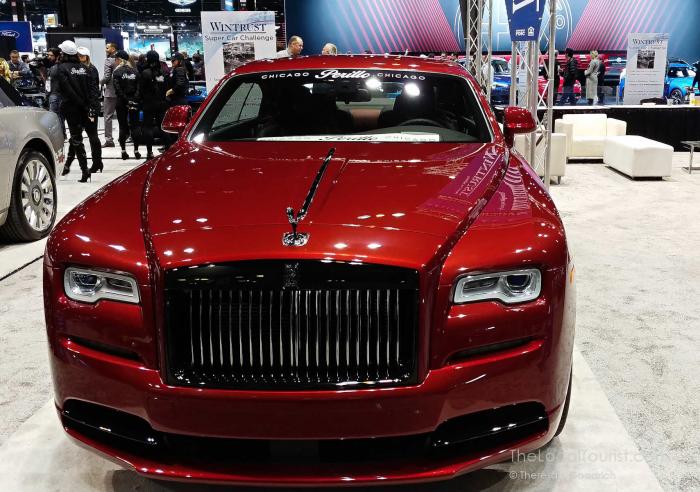 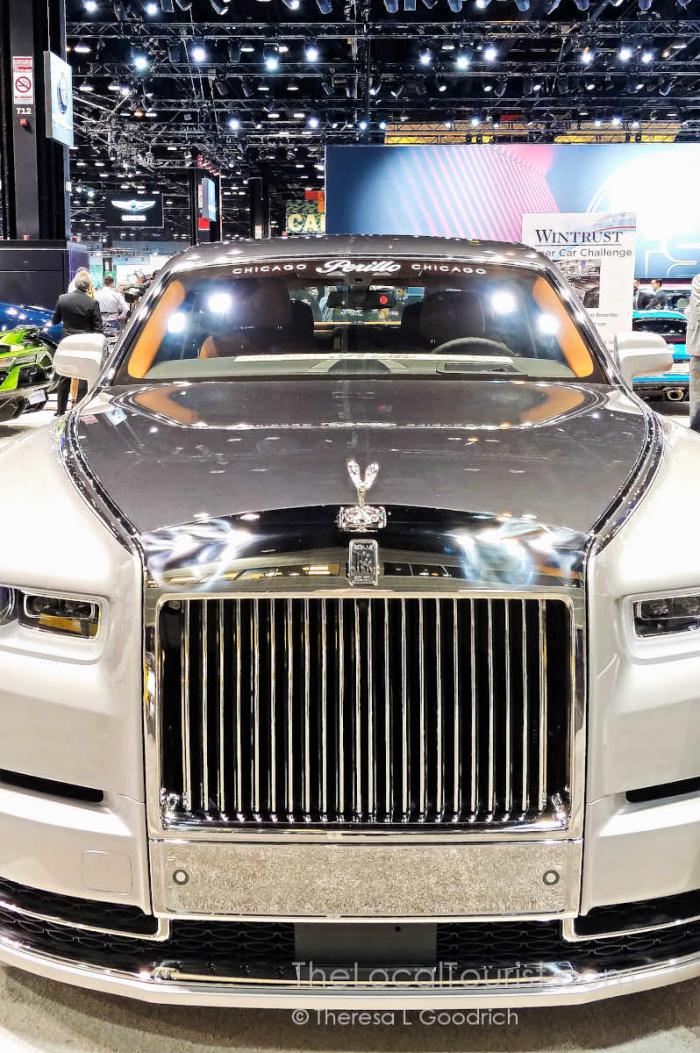 What’s your favorite thing at the Chicago Auto Show? Leave a comment and let us know!

If you like these photos, check out our Instagram highlights for even more pictures of the 2019 Chicago Auto Show!

Theresa Goodrich is the Emmy-winning founder and publisher of The Local Tourist. She's got a penchant for storytelling and a keen eye, and is the author of the Two Lane Gems book series.