I’m standing in the doorway of the stunning private room at the Fig & Olive in the Gold Coast. Waiters are scooting around me with trays full of dishes that look like they are plated just so someone can take their picture. A charming hostess is pouring me another glass of an Italian Rosé and I’m trying to blend into the wall so the waiters and the bussers and the guests and the host and all the people filing into the stunning private room for a stunning private tasting of a stunning new wine made from a classic Sicilian grape in a crazy traditional method can all get by me but I can’t move because Lucio Matricardi, the guy who made Stemarri’s stunning new wine has stolen my notebook and snatched my only pen out of my hand to draw me a picture of wood.

He draws a matrix of oak staves arranged in the classic stacked square structure often found inside the stainless-steel vats where vintners make their wine. Lucio hates this method because “ . . . how can the wine flow evenly?” he jabs the pen into the drawing. “Tell me, how?” And doesn’t wait for an answer. Which doesn’t matter because I have no idea what this guy is talking about even though he’s literally drawing me a picture. It’s rhetorical anyway. He explains how the wine can’t flow evenly because wherever the staves touch each other, the wine can’t penetrate. Lucio draws another diagram of a wine vat, but this time the staves are in tiers around the tank walls. They’re pointing inward. Nowhere do they touch each other. The wine flows free.

The waiters keep coming so I try to move because we’re standing in the narrow hallway between the kitchen and the restaurant. Every staff member has to wedge themselves around us to do their job. I keep trying to move Lucio beside me so they can flow free, like his wine, but here’s the thing about Lucio Matricardi. He is a man consumed by passion, a man who does not simply talk but instead delivers a passionate homily, a man for whom English is his third or maybe fourth language, his second being Italian, and his first being his hands. They are separate beings. They writhe and whip and flick and jab, building in thin air the technologies and arguments Lucio has used to develop a line of truly outstanding wine, and to change the way vintners use wood, which he is still explaining to me and or practicing karate, it’s hard to tell.

At some point, while working on getting his wine just right, Lucio realized there were no barrel firing standards for cooperages. This matters because the wine sits inside this barrel for a long time and pulls flavor from the burnt wood. Coopers could not control the fire they use to char the inside of a wine barrel. Because it’s fire. They could not tell a vintner how that burn would affect his wine. Until Lucio figured out a way to use convection – the same method by which you and I cook a decent turkey – which can be controlled. Suddenly a cooper can tell you the depth–to the millimeter–of their char. Which matters in building a complex flavor profile. Which Lucio determined by ordering chips from various firings, soaking them in water, then drinking it. Lucio drank wood juice.

And as I stand there trying to keep up with this guy, as he tells me he drank burnt oak water, I think: Lucio Matricardi might be crazy.

We finally get out of the waiters’ way, sit down in the lavish room, and taste the Stemmari wines. It’s the launch of their newest label, Hedonis Riserva. The wine is silky. It is deep. Rich. Luxurious. I’m holding it up, marveling at the way the light shines a garnet shadow on the table when Lucio tells me how they made this wine and I realize I was wrong when I thought he might be crazy. There’s no question. He’s nuts.

Stemmari makes Hedonis Riserva using the appasimento method. They take Nero d’ Avola grapes, a traditional Sicilian berry that somehow thrives in the multivalent and ruthless climate of that island. They take half the harvest and lay them out to dry in the sun. Not to the point of becoming raisins, but to turn each one into a concentrated tiny bomb of figgy, peppery flavor. Then they marry these abused grapes with the regular harvest. Then they age the wine in the aforementioned perfectly charred barrels, turning out a red that makes you want to kiss somebody. 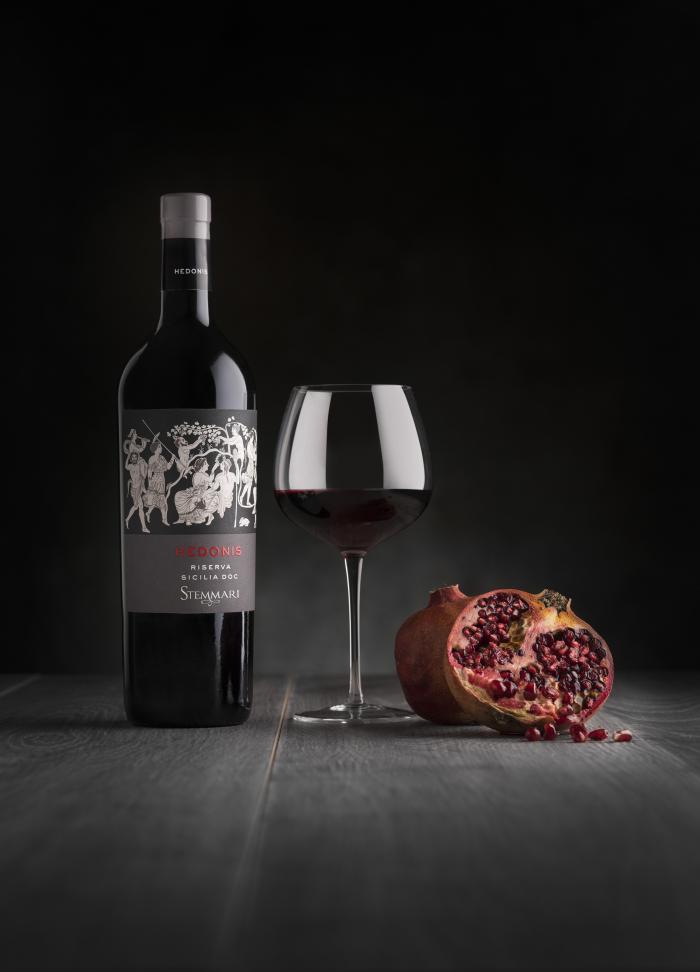 Like Verduna Pelaverga, Hedonis Riserva is made from a niche berry that over delivers. It is an enormous red, with powerful tannin structure and a flavor that’s a library of red wine’s greatest works. It’s pink peppercorns. It’s dried strawberries. It’s leather and tobacco and tar. It is rich and heavy and dark but also weightless and silken and bright. It is an impossible wine.

And you can’t have any.

Not yet. The people in that room were the first folk outside of the vintners to taste this remarkable red. And though they are working on distribution, Hedonis has only just arrived in their Illinois warehouse. It’s not at Binny’s. It’s not at Perman’s.

But it will be. Soon. And you’d be as crazy as Lucio Matricardi if you weren’t already standing in line with your money out ready to buy this wine.

Bull Garlington is an award-winning author and columnist. Visit bullgarlington.com