I was briefly paralyzed in the newly renovated lobby of the W Chicago – City Center. It wasn’t the up-lighted infinity ceiling, although the ceiling was brilliantly illuminated by purple lights and it did seem to disappear into the stratosphere. It wasn’t their new bar either, a gorgeously serpentine glass-topped bar that wove itself in a kind of U-shape through the middle of the lobby between old granite columns. It wasn’t even the back of the bar with its art deco centerpiece shooting up through the second floor and its formidable collection of spirits. It wasn’t any of those things, though all of them combine for a seriously arresting view. No, it was the contortionist. 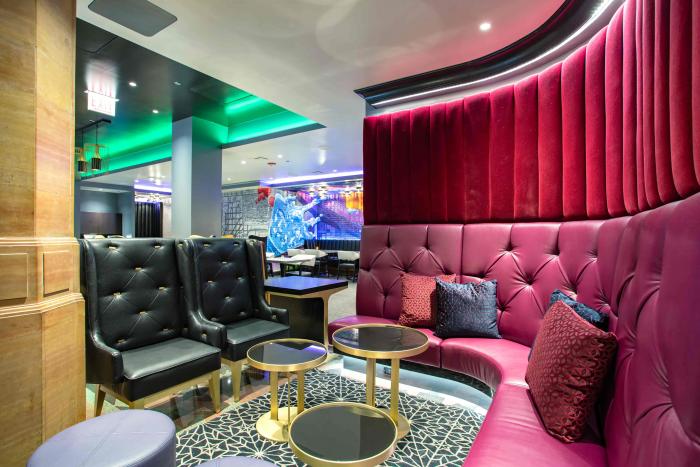 I should back up. See, the W was celebrating the multi-million-dollar refurbishment of their City Center property, a piece of Chicago’s Beaux Arts architectural history courtesy of 1928 at LaSalle and Adams which they’ve turned into some kind of throbbing post-post-modern temple of glorious decadence. The entire building has a new face but the centerpieces are the lobby and their restaurant, the Midland Social Club, which was the original name of the building.

On this night, to celebrate their new style, the W had loaded the place with the most beautiful people in Chicago and their even more beautiful friends, an exotic animal petting zoo, a juggler, a fortune teller, a brilliant electronic violinist, a sexy and startlingly regal drag queen, severely attractive models rocking a runway show, a giant albino boa constrictor, and the aforementioned contortionist and I’m telling you all this because this joint is about to become the new place to party for beautiful millionaires and for some reason they had invited me, a guy who was wearing white socks and slip-ons in the front row of a fashion show and hasn’t bought a new blazer in eight years. 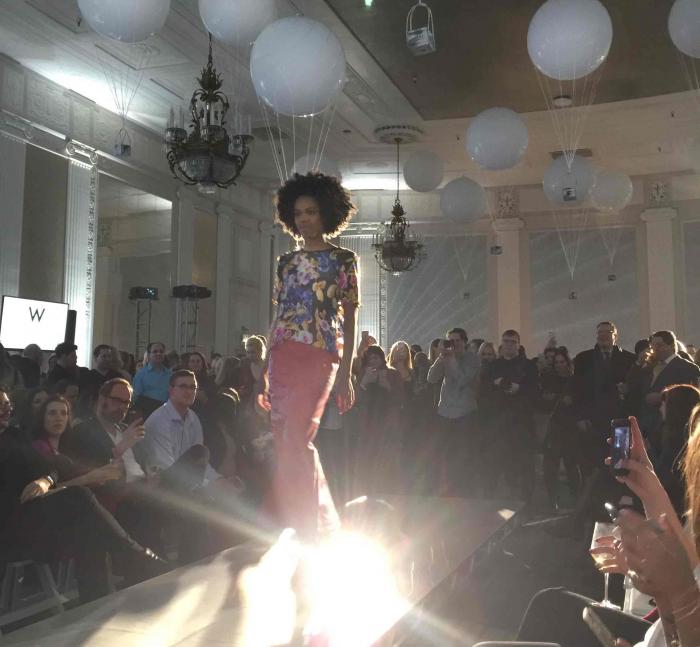 Not that I felt at all out of place. My house is loaded with jugglers and I swear if I have to move another albino boa constrictor so I can vacuum under the couch I’m going to lose my mind. But I’m just not normally in the company of distressingly beautiful contortionists so I’m unfamiliar with the necessary etiquette and I really, really needed to walk across the lobby right in front of this particular contortionist which I felt was rude but my wife had a snake around her neck and I felt compelled to rescue her.

I mean take her picture. Also, there were snacks. An entire sideboard of the new menu items from Chef Mark Powierski’s “New Urban Cuisine,” which included drool-inducing dishes based on Chicago traditional foods like Chinatown Sticky Pork, Taquitos de Pilsen, West Town Pierogis, and South Loop Border Mussels. There was beet soup with buttermilk which just shut up, it’s everything. Also there were drinks like the Cloud Gate, which is Ketel One Vodka, Giffard Pamplemousse, Grapefruit, Lemon, Sparkling Wine & Manicured Grapefruit. And the South Loop Marvel, made of Nolet’s Gin, Giffard Greme de Violette, Italicous, Lime, served over an ice block with an edible flower, which is my new summer go-to drink and also taught me how to dance.

I waited until the contortionist had shoved her head under her arm under her leg into the fourth dimension before I walked briskly across the lobby between her and the four hundred people taking her picture to peel a snake off my wife.

The new lobby and restaurant renovation at the W is a bit of a contortion in itself. Somehow, it uses the most contemporary architectural flourishes to highlight its early 20th century origins. It doesn’t seem like it can be done but like the remarkably flexible performer in the lobby, the W Hotels Group managed to twist this old property into new shapes and make it look easy. 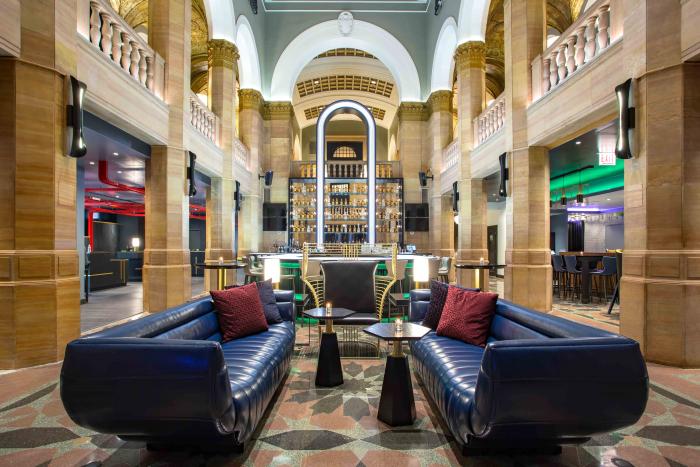 The swank quotient is beyond decadent. Their “contemporary lifestyle programming” for guests and locals includes a state-of-the-art fitness facility, a 24-hour business center, and more than 14,000 square feet of ultra-modern meeting and event space, including 13 meeting rooms and a 4,000 square foot Great Room (W’s twist on the hotel ballroom), perfect for accommodating large-scale events.

The hotel also offers W Hotels’ Whatever/Whenever® service promise, offering guests whatever they want – from a private boat tour of the city along the shores of Lake Michigan to a pair of jogging shoes at 2am which begs one to question why on earth they would want jogging shoes at 2 am when they should be dead center of this million-dollar bar having a drink.

Bull Garlington is an award-winning author and columnist. Visit bullgarlington.com